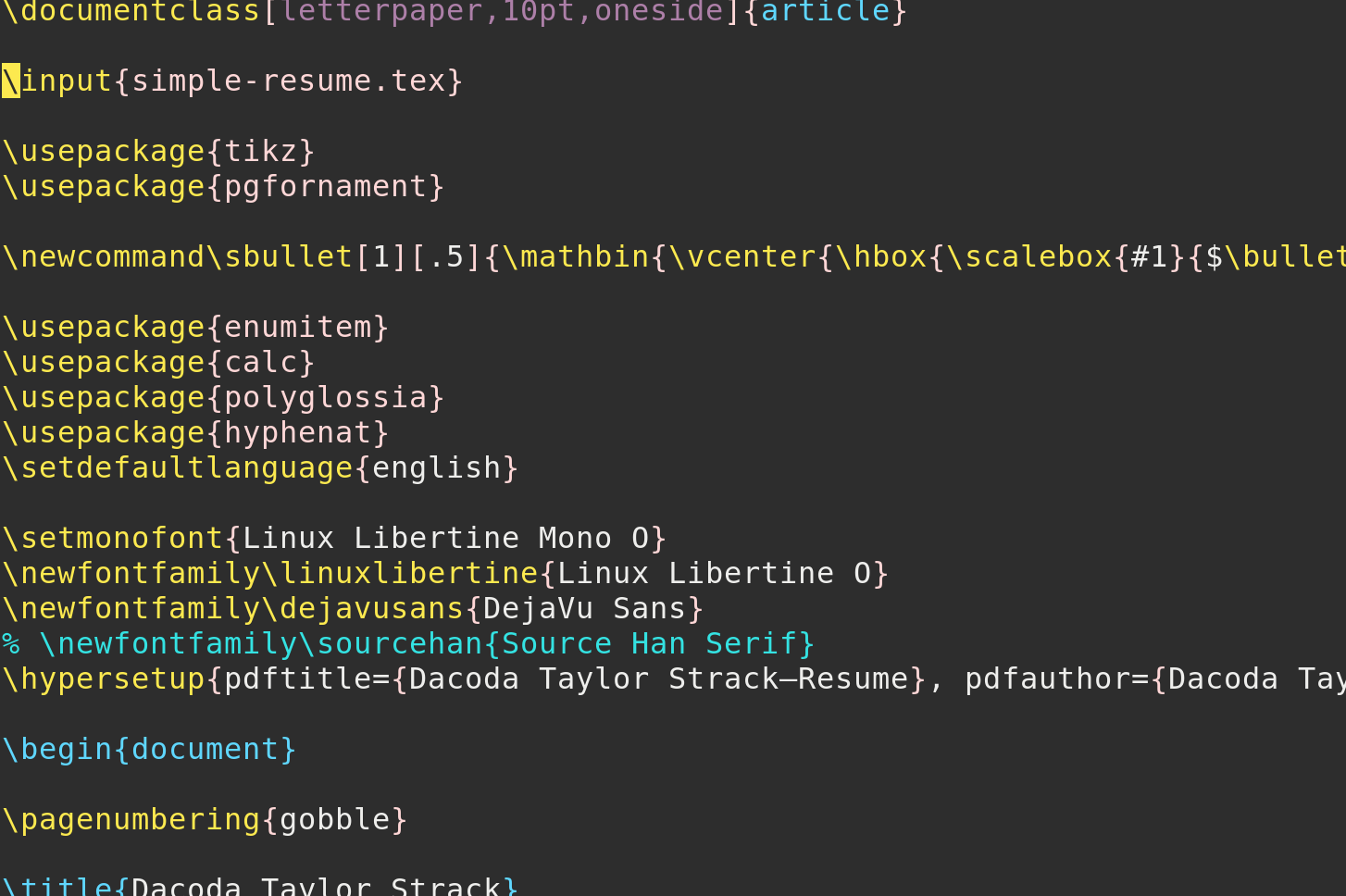 Ever since being introduced to the TeX ecosystem during my time as an undergrad at UCI, I have enjoyed exploring typesetting and learning what makes TeX tick in a different way than other text rendering engines. It is also interesting learning about portable ways to share documents, and what sort of interesting dependencies there are between the format and the underlying system which tries to display that format.

As a brief aside, Douglas Hofstadter touches on this quite a bit in his various books, the dependence of meaning or interpretation on the lower level “interpreter” or background. I have attempted to find some of the vivid examples that he brings up (for example, the information in DNA requiring a particular chemical environment in which to be interpreted to make proteins; or another analogy with a phonograph), but have been unable to so far. Looking for the terms substrate, environment, chemistry, and DNA in the indices of both I am a Strange Loop and Metamagical Thema have all failed to yield the section I was looking for. I will have to come back and look again soon. The closest I have found is in his article title Waking Up from the Boolean Dream, or, Subcognition as Computation in the section The Substrate of Active Symbols Does Not Symbolize, for my own future reference.

In any case, this idea that different “environments” and the primitives that it exposes leads to more easily- and more difficultly-expressed ideas is an interesting one, and it relates to TeX in the way that there is much more control over fine-grained typographic decisions in TeX than say, HTML.

As another aside, one project I have been curious to attempt is that of hacking some renderer—say Chromium’s Blink—to shunt out each text-justify: inter-word|inter-character-styled paragraph’s rendering out to something like TeX in order to try and get some very nice (though slower) justification unlike that which is offered out of the box. Surely it can be done, and I’ve been eager to tear apart XeTeX’s or other TeXs’ source to figure out how to easily do it.

All that to say, I like TeX a bit more because it yields results that sometimes look much prettier. But, I would still like an HTML resume for easier viewing and sending to people. Thus, the genesis of this project.

The main goal is to have a simple database backend for the resume and render it either to PDF through TeX or to HTML whenver I like.

While I had a version of my resume in TeX format, I decided I wanted to have access to the same information regardless of whether I was rendering using TeX or some other format. In order to do this I decided to cubbyhole all the data in a teensy SQLite database that I could modify, query, and tweak to my heart’s delight.

An added benefit of rendering from the database is the opportunity to create many different resumes for different potential positions, with different responsibilities and details highlighted for each role.

In order to achieve this goal, I start with the following schema.

SQLite has a JSON extension which helps out very much in create JSON objects from rows. I’ve learned that it is best to leave a database system to do the things it’s very good at—for example relational algebra for complex queries, aggregating, and whatnot. Here is an example query for each of the work roles, with a similar query being performed for each of the research roles.

The above query then results in the following JSON

Most of the above boils down to a lot of work templating things out, but the script that ties it altogether is rather simple.

The result is shown in the PDF resume here.

So the above paradigm works well, but relies on some programs not typically available in a web browser. Of course, another mustache template could be made for an HTML page, but building an HTML resume makes you think about having an interactive resume editor and perhaps being able to share this project more broadly with the world. For that reason, I set out

Foray into Webassembly with jq

My first thought was to compile jq to WASM so that I could use the same jq scripts I had for the desktop version. After taking a look at some repositories that have compiled jq for the browser previously, I found the project unworkable. Regardless, it served to lead to on the right track to properly compile jq with emscripten.

After running the above in the root of the jq repository, out pops some WASM and a Javascript file for loading and interacting with that WASM. Now, let’s figure out how to get SQLite running.

Standing on the shoulders of giants with sql.js

Thankfully, lots of people have wanted to use SQLite in the browser, there are already many solutions to this problem. I chose to use this sql.js repository which has some nice demonstrations of running queries in the browser on the client side. The only small tweak we are going to make to this repository is adding a define flag to enable JSON (-DSQLITE_ENABLE_JSON1).

After recompiling the WASM with support for JSON, we will appropriating the interactive query executor in examples/GUI/ for our own purpose of rendering the resume. The only small downside here is the reduplication of work that was previously done in jq with Javascript.